​Words have gender? Yes! In Spanish nouns have two genders, masculine and feminine. My simple strategies will help you use them quickly and avoid costly mistakes.

Get a clear picture of  where your Spanish skills will take you, and enjoy all the benefits. I’ll guide you through some simple steps to create a framework for using Spanish in your real life. Get the Spanish Study Plan Guidebook absolutely free while it lasts.

Life is full of different kinds nouns. ​And every noun has one gender.

Every form of communication is full of nouns. Every thought has at least one noun. Usually there are several nouns in each thought. And each noun has words connected to them that change, because they have to match genders. All of this sounds really complex, yet it is really simple concept with some basic strategies.

The big question >>> Is this noun masculine or feminine?And what’s the difference anyways?

Since English has no noun gender, this concept may seem strange and unimportant.Let me tell you, this is one concept you don’t want to underrate. It will drag down your skill level if you ignore it. So, dig into these strategies and flourish. The extra effort now will have big payoff over time.

Not long ago I assumed noun gender was based on biology and traits. I knew there were plenty of exceptions, but after immersing my mind into detailed linguistic studies, I now know that it is random (or to be more accurate – historical).

In it’s simplest terms, every noun is either masculine or feminine. Every person, place, thing, event or idea falls into one category only. Most nouns have no biological gender and no masculine or feminine traits. So, stop thinking of gender in those terms. This misconception is what causes all the confusion and errors.

The only rock-solid noun gender rule is:

Every noun is masculine or feminine.

You cannot rely on the word endings or other gender rules, because they all have exceptions. If you do sometimes you will make an error. This means that every new noun you learn, you must learn it’s gender too.

[tcb-script src=”https://embed.lpcontent.net/leadboxes/current/embed.js” async=”” defer=””][/tcb-script] A list of masculine, feminine and noun exceptions is included with the game

Do Not Read Next Section

Unless you want detailed explanation into the noun gender concept. If you are a beginner or still struggling, head straight to the strategies and tools after this section. It is better to take time to learn more nouns with their correct gender, than to learn the different noun gender groups.

All the variations are included. Even the ones called noun gender exceptions.

Okay, I admit that with humans and animals biological gender is the key factor. Males are masculine. Females are feminine. They are distinguished as follows:

Two, some nouns are completely different words between male and female.

Even though biology has clear male and female distinctions, there are still some complications. Here are a couple strange twists to be aware of:

With this special group, both male and female use the exact same word. The gender is only identified by a connected word (a determiner). These labels carry the gender. Here, the label is an article (el or la):

Unusually, this group uses the same word and gender label for both genders.

That’s right, even females have the masculine label. After all, who really know whether that rat is male or female? The gender is generalized and defaults to masculine.

Unlike humans and animals, the rest of the nouns have no biological gender. Places, things, activities and ideas are not male or female. They are not assigned by gender traits either. As a consequence, the gender assignment is random.

We can thank history for being kind to us. Spanish inherited only two genders. The third (extinct) gender, neuter, mostly merged with the masculine gender. This is where random assignment was born.

To show how wacky the gender assignments are, here is a list of tricky nouns:

As you can see, the masculine and feminine traits are irrelevant for gender assignment. There are some patterns with word endings and some rule breakers. That’s why it’s best to remember the only rock-solid rule and strategy #1 below.

Plus, some nouns have two genders. Each gender has a different meaning. Or one noun can have a different gender for a different geographical region. Sounds important, right?

It’s so important, that you need to look them up in the dictionary to get the correct meaning.

To put another way, nouns have a lot of variety. So, to identify gender accurately the following strategies will improve your accuracy and gender agreement with connected words.

That brings us back to the big question:

Is this noun masculine or feminine?

These simple strategies will help you to accurately identify a noun’s gender. And the FREE resources make it really easy to remember a noun and it’s gender. 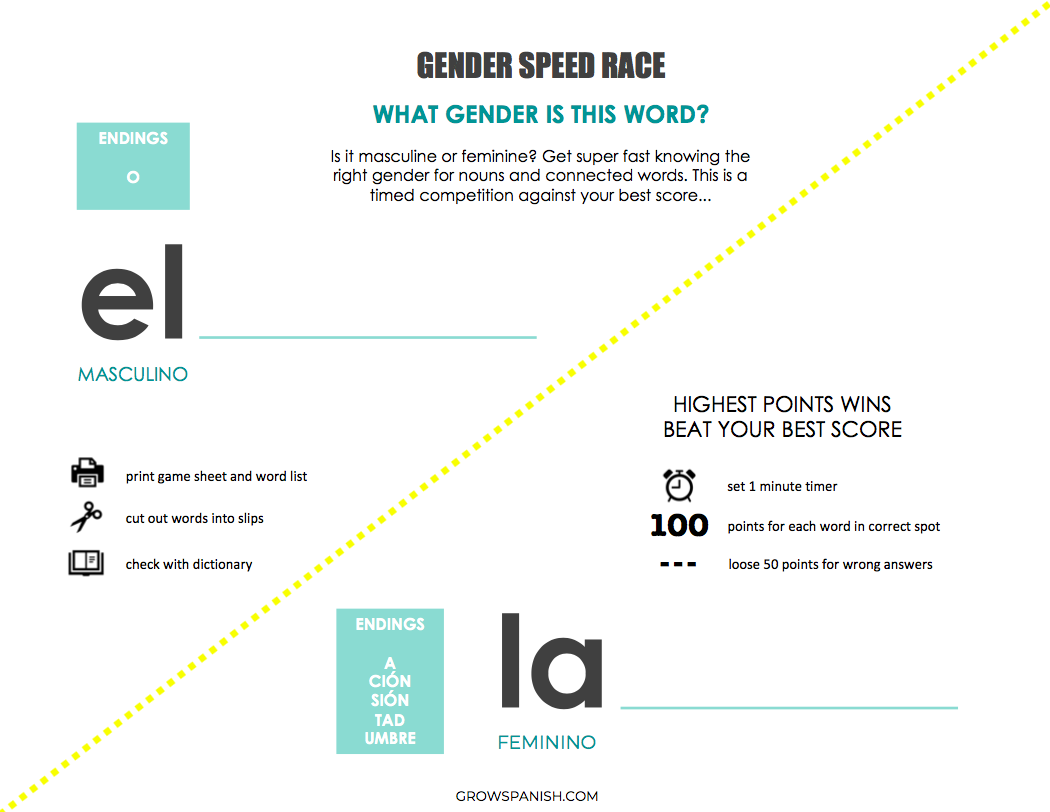 Let’s start with the most important strategy first:

The only absolutely accurate way to determine noun gender is to use the dictionary.

The sample entry below shows a noun that is ambiguous. Cometa has two meanings that change with the gender. For the people with no Spanish reading experience: cometa is a kite or a comet.

Strategy #2 Always Get the Gender

It is absolutely necessary to learn the gender for every new noun you add to your vocabulary.

As you build your vocabulary with focused effort, the gender is an essential fact to include with the definition. Vocabulary lists or books gather words and arrange them by topic. Usually, they include the article (el or la) with the word to identify gender.

The letter endings are useful to predict the gender of an unknown noun.

The gender rules are not accurate for building vocabulary. But at times they help to make a wholehearted attempt to be grammatically correct.

By default, nouns are masculine, unless assigned to be feminine.

With this general rule about 96 out of 100 nouns will be correct with this guess. The word’s ending indicates the gender.

-o are masculine-a are feminine

These rules are the reason why some nouns are considered exceptions. Truly, the nouns are not exceptions. In fact, the rules are not always reliable. Do not use the word endings to identify gender for new vocabulary. Because you will make errors.

Include noun exceptions in your vocabulary studies.

Since many nouns do not follow the rules, it’s important to learn the unpredictable ones. Here is a list of rule breakers:

Really, these words are nouns with specific genders that existed before rules. However, since they are so different from typical patterns, grammatical errors occur. Train your brain with the correct gender.

Consistent practice of nouns with their genders produces instant recall.

This is not your traditional drill and repeat. Rather, a game is memory training done right. It involves thinking and physical movement at the same time information is retrieved from the brain.

Try this game to learn and review nouns and their genders.

This post is just a taste of the valuable content in Grow Spanish Academy. We know what works and what doesn’t, and the learning process I teach at GSA will get you and your kids strong Spanish skills. GSA opens it’s doors just 5 short days a year, but join the waitlist now and you’ll be the first to know when our doors open again. We’ll even send you the Verb Conjugation Practice Sheets, absolutely free.

Why is noun gender so important?

To sum it up, clarity and accuracy is communication is only possible with correct gender use. As stated before, noun gender will change connected words. This is called gender agreement. Articles, adjectives and pronouns must match the noun gender.

As a result, these connected words are masculine too:

To sum it up, learning noun gender is important for a solid foundation in each language skill area. There are two genders sometimes determined by biology, but most often gender is randomly assigned. The five strategies will help you accurately identify whether a word is masculine or feminine.

Don’t let homeschool legal requirements scare you away from teaching your kids at home. I’ll point you to the information you need to start homeschooling in California. There are several online resources and homeshool support groups to help your family…

Make your study plan It’s hard to know how to start learning a language. Discover your reasons, the skills you want, how to rate your skill level simply, and your best learning styles. Receive the free guidebook straight to your…

There are many approaches to learning Spanish vocabulary, but not all are equally effective. The best way to learn new Spanish vocabulary is to focus on the words you’ll actually use. Curiosity, using the senses, and repetition are all important…

¡Hola! My name is Rachel Havana. I’m a bilingual mother of five who loves all things learning and creating. I enjoy helping others discover new ways to learn effectively.

get free printables sent to your inbox

As an Amazon Associate I earn from qualifying purchases.