And my mission is to find you practical tools to raise your kids bilingually in Spanish. Find out more about what we do here.

Our Everyday Spanish Starter Guide makes it simple to bring Spanish into your daily life. Grab it now while it's available, and the best part it's free!

The key to great pronunciation is learning the letter sounds. This Spanish alphabet craft introduces the letter names and sounds with a variety of activities. For all Spanish learners, improve your pronunciation in your listening and speaking skills.

Did you know I wrote those words in Spanish? Chances are no, because I am writing in English. Try them again in Spanish, now. Did you hear any difference? If you didn’t you’re in the perfect place right now, lucky you.

How do I say it right?

Start practicing the Spanish letter sounds from the beginning.

There’s a huge difference between the two. And it was obvious when I spoke.

Later, many mistakes and bad habits later, I figured it out with the help of phonetics classes at UCLA. Some sounds are the same. But there are big differences in the vowels and several consonants. It’s all about the letter sounds (not their names).

It wasn’t until I learned the sounds that my pronunciation became awesome.

The printable has instructions, letter cards and backing sheets to make a Spanish alphabet banner. It does require some assembly with cutting and hole punching. When complete, you will have either loose letter cards or a beautiful alphabet banner to hang on the wall. 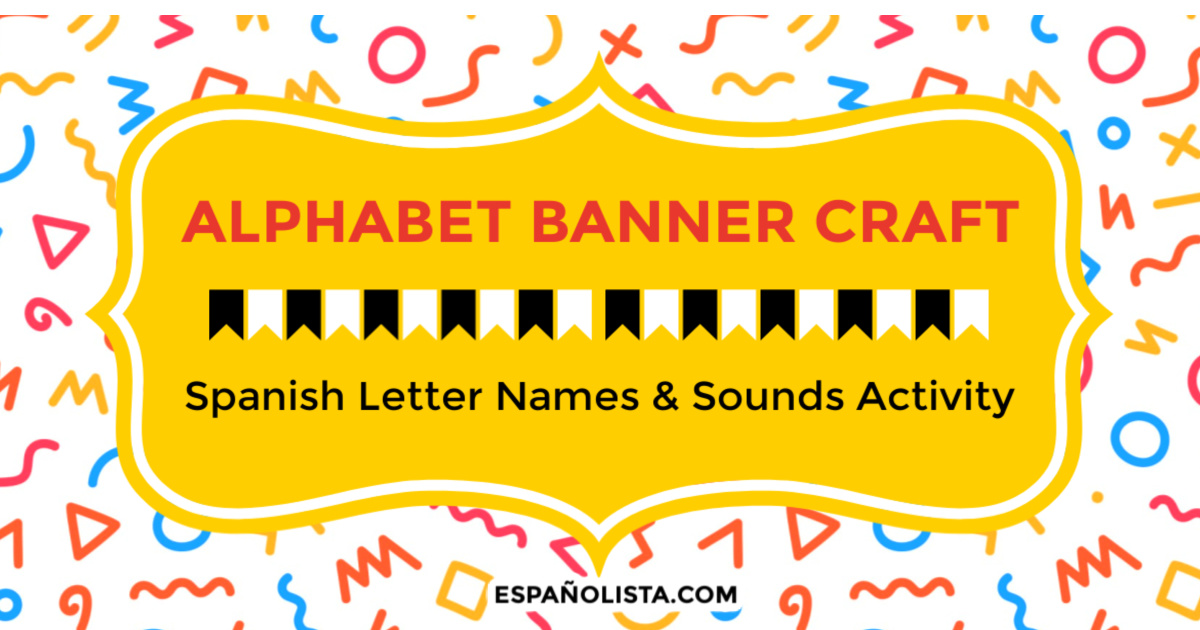 Both manipulatives are visual and tactile. The combination of senses helps to cement the letter symbol and sound into memory. With both ways, there are many learning activities to do.

Print cards to string together and hang on wall or door.

Gather these materials for the craft:

For a set of loose letter cards, cut along outside edge in the shape of a rectangle. See the letter A.

For the alphabet banner, cut the letter cards along outside edge, like the letter W in the picture. This leaves a triangular shape on the bottom.

The backing sheets are cut into quarters. Use the printed lines as a guide.

There will be about 1/4″ margin around each letter card.

6. Punch two holes along top of each letter card.

Place the holes about 1″ down from top edge and 1″ in from side edges. The string will be laced through the holes.

7. Run string through two holes of each card connecting the alphabet together.

You will need a length of about 10″ of string. Tie a knot in the end to keep it from unraveling.

Begin with letter Z and work backwards. Pull the end of string through hole from back to front. Then, put end through to back again. Move cards along string until all cards are complete.

Leave an extra length of string on each end to tie on wall or door.

Keep the letter cards stacked on table and hang the alphabet banner on the wall or door. They can be reminders to practice. Repetition is what cements the sounds in memory.

Having this banner hung on the wall is a great reminder to learn and repeat the sounds. Right away, my children noticed the different letter. I taught them the vowel sounds and the alphabet song. This simple craft gave my family a practical way to learn everyday.

I also put a set of letter cards on the table. I surprise them with a new word spelled out. My little ones read this in English ho-lah. I say it correctly oh-lah reminding them the letter h is silent. They are learning how to read and speak correctly in Spanish. And increase their vocabulary at the same time.

I can’t wait until they start spelling out their own words in Spanish.

The banner and cards are cute, but they are not just for decoration. It is a tool to use for some fun learning activities. The printable includes craft instructions and ideas for activities.

✮ Sing the alphabet song and point to the letters. Or chant or sounds instead.Make a rhythm.
✮ In alphabetical order, point and tell. Or mix cards, hold up one, and tell.
✮ Lay all cards face down. Flip and say name or sound. Correct answer keep the card. Most cards win.
✮ Spell a word with letter card and say the letter name one by one.
✮ Mix up letter all cards, alphabetize and say the sounds. Fastest time wins.
✮ Only vowels – say the cards letter name. Partner says the vowel sound back.
✮ Copy letters on paper and say sound.

Below, I share the ins and outs for the letter sounds. Some sounds are the same, others are different, the rest are completely new. Focus on the big ones, especially the vowels.

Keep all this in mind while doing the activities. Always engage in multiple ways – speaking, reading, writing, listening combined with movement, touch or a visual. This is what creates a lasting memory for later use.

At first glance, the Spanish and English alphabets look the same. With beginning Spanish phonics, the letter symbols, names and sounds will give a solid foundation for speaking skills. By focusing on each letter sound my pronunciation improved, even as an advanced learner.

According to Real Academia Española there are 27 letters in the Spanish alphabet. Ñ is the only additional letter to the English alphabet. CH and LL, the double digit letters have been gone since 2010.

Each of the 27 letter symbols have a letter name and at least one letter sound. The letter names and letter sounds have different uses. Both are part of beginning Spanish phonics.

The letter names are important for spelling and alphabetizing. A traditional alphabet song is a good way to learn the letter names. This is an essential skill.

Next, the main focus for the alphabet is on the letter sounds. English letter sounds are very different from the Spanish ones. Good pronunciation comes from learning these sounds from the beginning.

One sound for each vowel makes Spanish really easy to read. But, first you must learn the correct sounds for each vowel through repetition. Practicing the vowel will make correct pronunciation of vowels automatic.

Pronunciation Tip – All of the vowels sounds are very short, meaning said quickly and clipped (not drawn out).

For the consonants, some are the same, similar or completely different sounds from English. The best way to approach the Spanish consonants is to watch and listen to a native speaker. Some of them have different tongue and lip positions. Imitate until you get it right!

Here is a list of the Spanish consonants with their sounds. They are grouped together by similar, different and unique compared to the English letters. That way you can focus on learning the different and new sounds. This is the key to improve pronunciation.

For the most part, these letters are close to English

These Spanish letters are completely different from the English sounds.

These Spanish sounds are unique for the letters-

As you can see, there are a lot of differences in the way letters sound between both languages. Taking the time to focus on learning the correct Spanish pronunciation will give a solid foundation for speaking skills.

To sum it up, repetition of the sounds will change your language learning journey ahead. These activities will give you a solid foundation for future language skills. A simple step in the beginning can make the rest of learning a lot more productive.

Want your kids to say something in Spanish? Three simple steps show you exactly how to start speaking Spanish with your kids. The best part - it's absolutely free right now!

If you love this resource, be sure to check out our digital library of helpful tools and resources for building vocabulary, grammar and hands-on kids activities to raise your kids bilingually easier than ever before.

Thanksgiving | Giving Thanks in Spanish

Please log in again. The login page will open in a new tab. After logging in you can close it and return to this page.